In their findings published on Wednesday, the Independent International Fact-Finding Mission on Venezuela cited evidence of unlawful executions, enforced disappearances, arbitrary detentions and torture in the country since 2014.

Senior military and ministerial figures were likely aware of the crimes, said the investigators, who were appointed by the Human Rights Council in Geneva in September last year.

“They gave orders, coordinated activities and supplied resources in furtherance of the plans and policies under which the crimes were committed,” the report stated.

President Nicolas Maduro also likely “side-tracked the chain of command”, to ensure the commission of crimes, including the head of the Bolivarian National Intelligence Service (SEBIN) the report’s authors maintained.

“We have reasonable grounds to believe that the President Maduro did give orders to the director of SEBIN as to who to target”, said investigator Francisco Cox. “After that, these people were surveilled, information was gathered, their communications were intercepted and finally they would be detained without judicial order, just because there was such an order by the President.” 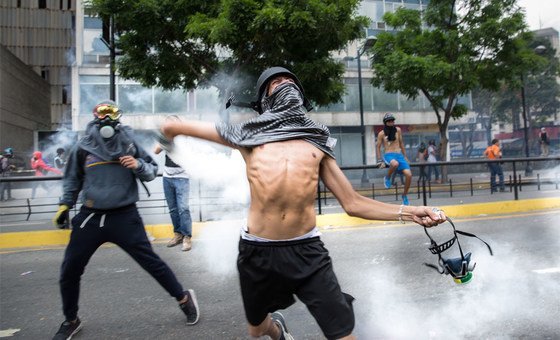 Protesters in La Castellana, a neighborhood in eastern Caracas, Venezuela., by <a href=http://bit.ly/2vkFd1n>Helena Carpio/IRIN</a>

Mr. Cox added: “We have involvement on contribution to the crime by Mr. Maduro, either directly through the chain of command”, or sometimes bypassing commanders, “and giving the direct order.”

The panel’s work, which was carried out without the cooperation of the Venezuelan Government, despite official requests, is contained in a 411-page report covering more than 220 cases.

Thousands more files were also reviewed which identified “patterns of violations …that were highly coordinated” by the authorities.

These included crime-fighting operations by the State, “politically motivated detention and torture” by State intelligence agencies, and the “increasingly violent response” to mass opposition protests including last year.

Alleged violations included the killing of 36 protesters, as well as torture in detention, including beatings and humiliation, sexual and gender-based violence and mock executions.

State authorities had also failed to intervene in several cases where protesters were killed by armed civilian groups known as “colectivos”, the report’s authors noted, amid an increased State “reliance on military-civilian coordination to maintain public order in recent years”.

These crimes were “part of a widespread and systematic course of conduct, thus amounting to crimes against humanity”, the authors maintained, in a call for further action by the International Criminal Court (ICC), along with justice and reparations for the victims and their families.

Although the report notes that “in some limited cases” there have been domestic judicial investigations that have resulted in convictions inside Venezuela for crimes committed, “the vast majority of unlawful killings by security forces have not resulted in prosecutions” the investigators said in a statement. 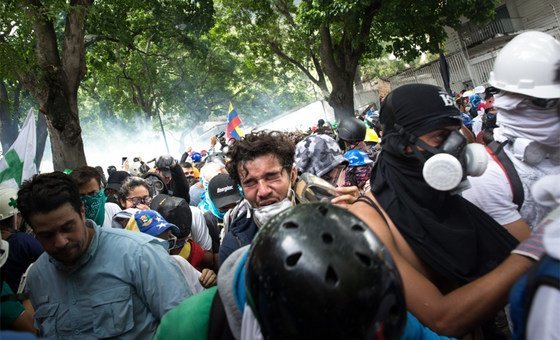 “There is as far as we can see no record of any serious investigation into those with a higher level of responsibility in terms of organising crime and instigating these kinds of crimes that have been committed”, said report co-author Paul Seils.

The ICC had “already indicated that it is examining their position”, he added, “and therefore one can assume that it stands ready to make a decision on whether or not to open an investigation”.

Even conservative estimates suggest that Venezuela has one of Latin America’s highest rates of killings by State agents, the report noted.

As part of their work, the investigators examined 16 police, military or joint operations that resulted in 53 extrajudicial executions.

They also reviewed 2,552 more incidents involving 5,094 killings by security forces, not all of which were arbitrary.

Highlighting the work of Operations for People’s Liberation (OLP), which was established to fight crime, the UN-appointed experts investigated or reviewed 140 operations which resulted in “413 people being killed, sometimes shot at point-blank range”.

In the Santa Rosa de Agua area of Maracaibo, Zulia State, in September 2015, an operation left five men dead and more than 60 detained.

“Most of them (were) fishermen returning from work; women were mistreated and household items looted,” the report explained.

Although the OLP was reformed as the Operations for People’s Humane Liberation (OLHP) before being phased out mid-2017, “extrajudicial executions continued”, the report explained.

“Two security forces – the CICPC and the Special Action Forces (FAES) of the National Bolivarian Police (PNB) – were responsible for 59 per cent of all killings by security forces in the period under review, and were the perpetrators of the extrajudicial executions documented in the report.”

Citing PNB/FAES officials, the report’s authors said that it was “common practice” to cover up killings.

This was done by planting weapons to simulate “confrontations”, while a source in the report confirmed that superiors could grant officers a “green light to kill”.

Underlining the level of alleged State involvement in such operations – and repeated praise from the authorities for them – investigator Marta Valinas added that these extrajudicial executions were not the result of rogue elements within the security forces.

“High-ranking officials had effective command and control over the perpetrators and knowledge of their actions but failed to prevent or repress the violations”, she said. “The killings appear part of a policy to eliminate unwanted members of society under the cover of combating crime.”

She added: “Most of the victims were young men, who were targeted due to the real or perceived involvement in criminal activities.”

The Mission’s report is due to be presented to the Human Rights Council on Wednesday 23 September.