Though exact numbers are yet to be confirmed, initial estimates indicate that more than 87,000 mostly Rohingya refugees, originally from neighbouring Myanmar, could have been caught up in the blaze, which started around 3pm on Monday (local time) in Camp 8W of the Kutupalong mega camp.

UN teams have been deployed to evacuate and assist tens of thousands of refugees in Cos'x Bazar, Bangladesh, left without shelter after a massive fire tore through the refugee camp.

The fire rapidly spread to Camps 8E, 9 and 10. In all, about 66 per cent of the population have been impacted, according to the UN International Organization for Migration (IOM).

According to the humanitarian Inter-Sector Coordination Group (ISCG) in Cox’s Bazar, early information indicates that 15 people lost their lives in the fire, about 560 were injured and over 400 missing.

There are also reports that children are among the injured and many have been separated from their families.

Two nutrition centres and one food distribution centre run by the UN World Food Programme (WFP), and IOM’s largest health clinic in the camp, also burnt to the ground. Two other WFP nutrition sites and one e-voucher outlet have been closed until damage can be assessed.

Affected refugees have sought shelter with families and friends, as well as transit sites operated by the UN refugee agency (UNHCR), WFP added.

The Kutupalong camp network, which includes about 26 subcamps, houses over 700,000 of the roughly 880,000 Rohingya refugees sheltering in Cox’s Bazar, Bangladesh (as of February 2021).

In January, more than 3,500 refugees were left homeless when a fire destroyed some 550 shelters and 150 shops in the Nayapara camp, about 30 kilometres (19 miles) south of Kutupalong. 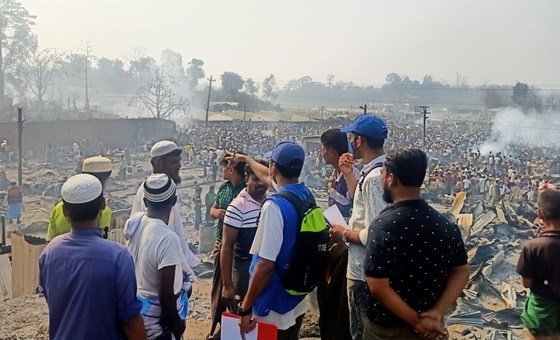 IOM Photo | IOM personnel at Kutupalong refugee camp in Bangladesh. In the background are the tens of thousands of refugees displaced after the fire. ​

WFP engineering and field personnel, as well as food assistance teams have been on the ground since the fire was first reported.

The agency also deployed light and heavy machinery, including water tanks and volunteers to help contain the fire and support site management agencies. It also distributed about 6,000 cartons of high-energy biscuits to affected families the night of the fire.

IOM deployed ambulances and medical teams to respond to injuries and to provide mental health and psychosocial support. It is also distributing emergency shelter kits, as well as blankets, solar lights, mosquito nets and jerry cans.

The UN Children’s Fund (UNICEF) also mobilized first aid teams and volunteers to evacuate refugees from their shelters. The agency’s child protection personnel and partners are also assisting children in need, including those separated from their families.

“Our priority is to secure the immediate safety, security and protection of children in coordination with the concerned authorities, first responders and partner organizations in the UN and NGO community”, Tomoo Hozumi, UNICEF Representative in Bangladesh, said in a statement. 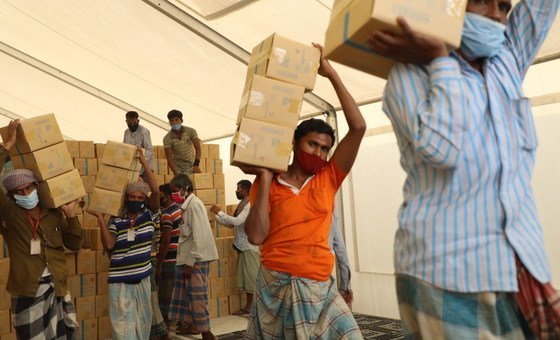 WFP Bangladesh/Nalifa Mehelin | Since the night of the fire, WFP has distributed 6,000 cartons of high-energy biscuits to families affected.

The complex Rohingya refugee crisis erupted in August 2017, following attacks on remote police outposts in western Myanmar by armed groups alleged to belong to the community. These were followed by systematic counter attacks against the minority, mainly Muslim, Rohingya, which human rights groups, including senior UN officials, have said amounted to ethnic cleansing.

In the weeks that followed, over 700,000 Rohingya – the majority of them children, women and the elderly – fled their homes for safety in Bangladesh, with little more than the clothes on their backs.

Prior to the mass exodus, well over 200,000 Rohingya refugees were sheltering in Bangladesh as a result of earlier displacements from Myanmar.