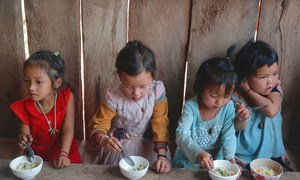 Across the globe, at least one-in-three children under-five are malnourished and not developing properly, UNICEF revealed on Tuesday, in its most comprehensive report on children, food and nutrition in 20 years.

“An alarmingly high number of children are suffering the consequences of poor diets and a food system that is failing them,” the UN children’s agency (UNICEF) warned.

Around 200 million children under-five are either undernourished or overweight, while one-in-three globally – and almost two-thirds of children between the fragile ages of six months to two years – are not fed food that nurtures proper development, The State of the World’s Children 2019: Children, food and nutrition, found. Our full story here. 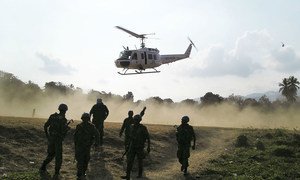 Although 15 years of UN peacekeeping in Haiti has drawn to a close, the Organization’s commitment to strengthening and stabilizing the country, will continue, the Security Council heard on Tuesday.

“This chapter, which comes to an end today, was characterized by shared successes with the people of Haiti, the tragedy of the (2010) earthquake, and by lessons in what we should have done better. Today, we must think together about all these aspects: They are the basis on which we can go into the next stage of the partnership of Haiti with the United Nations,” he said. Full details here.

In Syria, violence continues ‘on both sides’ of border with Turkey 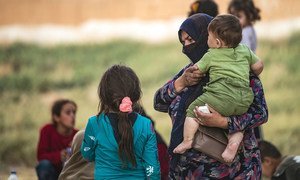 Amid ongoing fighting in northern Syria and disturbing reports that extrajudicial killings have been streamed online, the United Nations and their partners are continuing to deliver humanitarian supplies to tens of thousands of people displaced by the violence, UN agencies stressed on Tuesday.

Since Turkish forces began their offensive last Wednesday, at least 160,000 civilians have been displaced, with hospitals and schools and other public infrastructure hit or affected by the fighting.

According to the World Food Programme (WFP), 83,000 people have already received food aid. UN Children’s Fund UNICEF, meanwhile, confirmed the deaths “of at least four children and the injuries of nine in north-east Syria”, along with seven other youngsters in Turkey. Find our coverage here.

Syria-Turkey update from Special Advisers on Genocide, Responsibility to Protect

The Special Advisers stated that “the civilians of Syria continue to live through one of the worst conflicts of our time, with repeated violations of their basic rights and protections guaranteed under international law. This latest escalation of the conflict again puts civilians at grave risk. The Office of the High Commissioner for Human Rights has reported on several civilian casualties, including allegations of summary executions, and humanitarian actors report that at least 160,000 civilians have been displaced in the six days since the start of the military operation.”

The Special Advisers also stressed that Turkish authorities “and all parties to the conflict in Syria need to ensure strict adherence to the legal obligation to protect civilians. This is the responsibility of all State and non-State actors. No civilian should be forced to leave their home against their will.

In addition, they said, any return of refugees needs to be voluntary and when conditions are safe for them to do so sustainably.  The full statement can be found here.

Concerns over deportation of Haitian migrants from Bahamas to Haiti – OHCHR 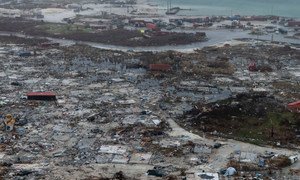 In the Bahamas, there’s concern that over 100 Haitian people have been deported, including some from the Abaco islands, that were devastated by Hurricane Dorian only weeks ago.

In a statement, the UN human rights office, OHCHR, said that there is “panic” among Haitians since the authorities reversed their decision not to enforce immigration checks in places affected by the natural disaster. It also cited reports of people leaving temporary shelters because they feared being arrested, and of others going into hiding.

In an appeal to the Bahamas, the UN office urged the authorities not to deport anyone else, noting that many Haitian migrants lost their documents, jobs and belongings when the hurricane hit the informal settlements where they live. 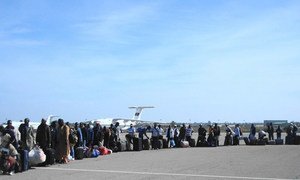 For the first time, more than 160 migrants flew back to their homes in Niger on Tuesday, after leaving Algeria, with the help of the UN migration agency, IOM.

Working with the Governments of both countries, IOM helped men, women and children board the inaugural flight from the Southern Algerian city of Tamanrasset to Niger’s capital, Niamey.

The voluntary returns initiative was set up to prevent the migrants from having to repeat the long journey that took them northwards in the first place.

After the migrants have returned to their communities, they are given help to reintegrate, depending on their needs, skills and aspirations. This can include medical assistance or vocational training, IOM says, or setting up a business. 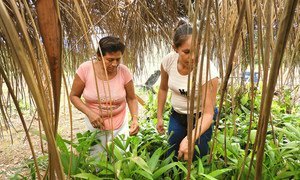 Rural women and girls across the world are a “powerful force” in global action to respond to climate change, according to the UN Secretary-General António Guterres. In a message to mark the International Day of Rural Women, observed annually on 15 October, the UN chief said that “listening to rural women and amplifying their voices is central to spreading knowledge about climate change and urging governments, businesses and community leaders to act.”

The theme for this year’s celebration is “Rural Women and Girls Building Climate Resistance.”

Listen to or download our audio News in Brief for 15 October on Soundcloud: