World on course for more than 3 degree spike, even if climate commitments are met: UN environment agency 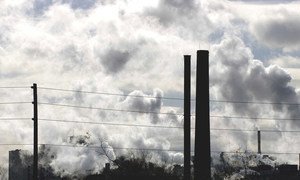 Even if countries meet commitments made under the 2015 Paris Agreement, the world is heading for a 3.2 degrees Celsius global temperature rise over pre-industrial levels, leading to even wider-ranging and more destructive climate impacts, warns a report from the UN Environment Programme, released on Tuesday.

The annual Emissions Gap Report, which compares where greenhouse gas emissions are heading, versus where they need to be, shows that emissions need to fall by 7.6 per cent each year over the next decade, if the world is to get back on track towards the goal of limiting temperature rises to close to 1.5 degrees Celsius.

If the world warms by more than 1.5 degrees, we will see more frequent, and intense, climate impacts – as the Intergovernmental Panel on Climate Change (IPCC), has demonstrated in several hard-hitting reports – such as the heatwaves and storms witnessed in recent years. 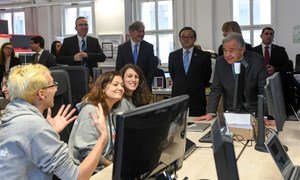 Unless countries work together to address gaps in digital access, as well as related social and political divisions, this generation will be remembered as the one that “ruined the early promise of the Internet”, the UN Secretary-General has warned.

António Guterres was speaking on Tuesday at the Internet Governance Forum taking place in Berlin this week: “Connecting all the world’s people by 2030 must be our shared priority, not only for sustainable development, but for gender equality”, he said, highlighting the role of the Internet in achieving a more equitable future.

With 2019 marking the 30th anniversary of the Berlin Wall being torn down, the UN chief expressed frustration that “not only are we still building physical walls to separate people, but that there is also a tendency to create some virtual walls in the Internet, also to separate people.” The only solution, he said, is a future with “one world, one net, one vision.” 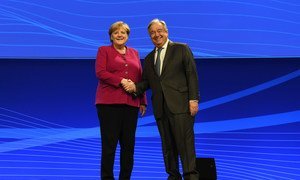 During his visit to Berlin, Mr. Guterres took the opportunity to praise Germany’s “leading role” in climate action, lauding the country as a “model of global responsibility and universal values”, in remarks to the press.

Germany is planning to be carbon-neutral by 2050, and the UN chief declared that he is counting on German leadership, when the European Council discusses its own 2050 carbon neutrality strategy.

“Governments must adopt commitments that are much stronger than those in the Paris Agreement”, he said, “and climate action offers long-term economic and financial advantages for those who seize the opportunity”.

The Secretary-General thanked the German chancellor for hosting a conference that will bring together all who have an influence in relation to the Libya conflict, and to achieve the conditions for a ceasefire, and a political process that leads to peace in the country.

The conflict in Syria, and ongoing suffering of the Syrian people, were also mentioned by Mr. Guterres, who expressed hope that the UN-backed Constitutional Committee will allow the warring parties to start discussing an end to the fighting, and create conditions for a true political solution, led by Syrians, to emerge.

HIV in decline, but thousands of children still being infected 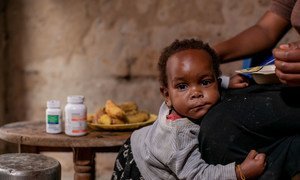 HIV infections are in decline worldwide and more people living with HIV are getting access to treatment, but still thousands of children are still “falling between the cracks”.

That’s the message on Tuesday from the United Nations agency leading the fight against the disease, UNAIDS, in a report released ahead of World AIDS Day on Sunday.

The agency said that nearly two in three people living with HIV, an estimated 24.5 million out of 37.9 million people, now get treatment. That means that fewer people are dying of AIDS-related diseases, but there are still major concerns that a quarter of a million children aren’t getting the care they need.

In a statement, UNAIDS Executive Director Winnie Byanyima also insisted that when people living with HIV actively participate in their own care, new infections drop and accessing treatment becomes easier. 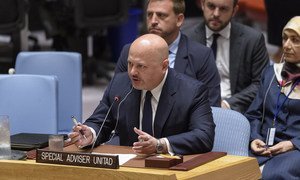 The leader of the special UN Investigation Team probing crimes committed by ISIL terrorists in Iraq (UNITAD), said on Tuesday that the courage being demonstrated by survivors coming forward “serves to underline the urgency” they need to carry on with their work.

Karim Asad Ahmad Khan, told the Security Council that the “experiences and needs of the survivors of ISIL crimes, and the families of its victims”, were firmly at the centre of UNITAD’s mission.

“I was humbled by the immeasurable strength of the women and girls I spoke to”, he said. “Despite suffering abduction, enslavement and unspeakable treatment, they were willing to reengage with these memories in order to assist in holding their abusers to account.”

Mr. Khan said that key evidence collection has been completed in recent weeks, and he cited three-dimensional laser scanning of crime scenes in the Yazidi city of Sinjar, and “the successful use of social media crowdsourcing campaigns” to collect information on suspected ISIL members, that have generated thousands of responses. DNA profiles have also been retrieved from mass grave sites.

Listen to or download our audio News in Brief for 26 November on SoundCloud: