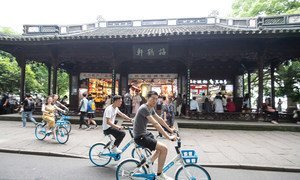 Cars have replaced bicycles as the primary means of transport in many Chinese cities but, with air pollution a major problem for the country, the bike is making a comeback, thanks to digital technology, and some 21st Century thinking.

China was once considered to be the “Kingdom of the Bicycle,” with bikes dominating city streets across the country, but over the past four decades, China’s dramatic economic prosperity and urbanization has seen many people move to motor vehicles as their primary means of transport, contributing to a marked deterioration in air quality. 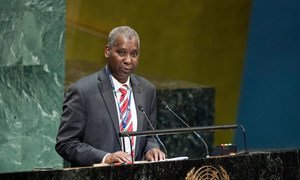 The global reach of the United Nations makes it “the world’s best hope for peace and security, sustainable development and the promotion and protection of human rights and social progress”, said the top Nigerian diplomat who will be the next President of the General Assembly.

Tijjani Muhammad-Bande, Nigeria’s current UN Permanent Representative, was elected to head the world body by acclamation on Tuesday in the General Assembly Hall in New York and will succeed Ecuador’s Maria Fernanda Espinosa.

Find our full coverage of the election here.

Vital food crops destroyed in Syria amid upsurge in fighting across Idlib, Hama

Thousands of acres of crops have been destroyed in Syria’s Idlib and north Hama amid ongoing deadly violence, the World Food Programme (WFP) said on Tuesday, in a call to the warring parties to stop using food security to hold people “hostage”.

In a briefing to journalists in Geneva, WFP Spokesperson Hervé Verhoosel expressed alarm at the humanitarian crisis in the north-western opposition-held enclave, where a Government-led military operation escalated in late April.

Thousands of men, women and children face dire conditions at detention centres for migrants in Libya, the UN refugee agency has said, warning that vulnerable people are being sent to them faster than it can secure their release. According to UNHCR, the country’s coastguard rescued or intercepted some 1,200 in May alone from the Mediterranean, before bringing them back to shore; that’s more than for the whole of 2019.

The development follows ongoing conflict in and around the outskirts of Tripoli, instigated by the self-styled Libyan National Army forces of General Khalifa Haftar, who leads a parallel administration in the eastern city of Benghazi.

UNHCR spokesperson Babar Baloch, descrived the situation at Zintan detention centre, south of Libya’s capital Tripoli, as follows: “Conditions in Zintan are dire… Toilets are overflowing and are in urgent need of repair. As a result, solid waste and garbage has piled up inside the cells?? SURELY NOT ONE CELL!? for days and presents a serious health threat. Tensions amongst the detainees are rising as they become increasingly agitated and desperate. In total, 654 refugees and migrants remain held in Zintan.”

On Tuesday, UNHCR reported that it had moved 96 people out of Zintan; they were from Somalia, Eritrea and Ethiopia, and included two newborns. 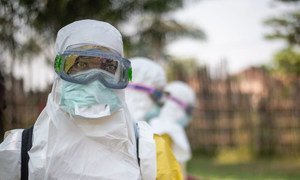 In the Democratic Republic of the Congo (DRC), where the World Health Organization has expressed frustration at insecurity challenges as the number of cases of Ebola virus disease has now passed 2,000.

Since the beginning of the outbreak last August, more than 1,340 have died.

The UN response has been hampered by attacks by armed groups, protests and demonstrations, including one in April that killed a WHO medic, Valery Mouzoko Kiboung, in Butembo. 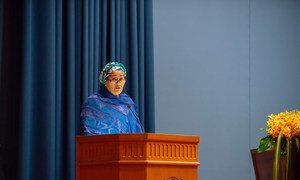 Continuing her trip to London, the UN Deputy Secretary-General, Amina J. Mohammed, attended several events on Tuesday, highlighting the importance of “Our Shared Humanity” and our global values, and the centrality of unlocking the potential of women and girls.

“The solidarity expressed in the United Nations Charter’s opening words, ‘we the people’, is critical for our humanity’s future. The values enshrined throughout the document must remain our benchmark and guide,” said Ms. Mohammed in her statement delivered at foreign affairs think-tank, Chatham House.

Urging the world to move faster towards the 2030 Sustainable Development Goals, she noted that “without deep transformation, we risk catastrophic climate change; mass extinction of ecosystems and species; even higher levels of forced displacement; a major rollback of decades of development progress – and all of the political turmoil that accompanies social and economic disruption.”

In another event on tackling inequality, she stressed the importance of unlocking the power and potential of women and girls. “Gender equality is one of the critical social, economic and political priorities of our time. This should not be such a struggle.  After all, the benefits of gender equality are many and proven.”

She urged countries to adopt “well-designed and targeted policies that enhance the opportunities of women to participate in economic activities and in political and public life” and added that “public spending on health, education and social protection should be increased to build the capacities that women and girls need to succeed in a technologically-driven 21st century.”

Listen to or download our audio News In Brief for 4 June on SoundCloud: