Time to ‘move the dial’ on climate ambition 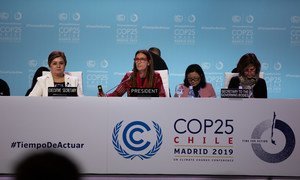 Six days after the originally scheduled closing of COP25, the head of UNFCCC, the UN body tasked with organising the climate conference, has released a statement  acknowledging that developed countries, particularly those responsible for the highest levels of harmful emissions, did not send a clear enough signal that they are ready to improve their climate strategies.

Patricia Espinosa, Executive Secretary of UNFCCC (the UN Framework Convention on Climate Change), noted that an agreement on guidelines for a carbon market was not reached: this was a major disappointment, as rules on a universally-agreed carbon market are seen as an essential element for raising climate ambition in the private sector, and generating finance for climate adaptation.

“Developed countries”, she said, “have yet to fully address the calls from developing countries for enhanced support in finance, technology and capacity building, without which they cannot green their economies and build adequate resilience to climate change”.

Although many positive signs of progress were announced at COP25, such as decisions taken in areas including technology, oceans and agriculture, gender and capacity building, Ms. Espinosa warned that “not enough major economies have signalled that they are ready to shift the needle on climate ambition through improved plans”.

Looking forward, Ms, Espinosa called for stakeholders to focus on the next steps, particularly COP26 in Scotland, next November, and further strengthen trust in the multilateral process.

Tobacco use falling at last among males, says WHO 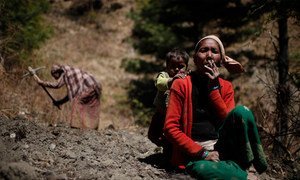 Two decades of increasing tobacco use around the world are set to go into reverse, UN health experts have said, after publishing data indicating that fewer men and boys are smoking than before.

According to the World Health Organization (WHO), this is the first time that nicotine product use has begun to fall among men and boys, who represent four in five smokers: around one billion males use tobacco and that number rose by 40 million between the year 2000 and 2018.

But thanks to tough Government measures against smoking, the WHO believes that, by 2020, at least two million fewer males will be using tobacco, with a further three million kicking the habit by 2025.

Cholera cases decreased globally by 60 per cent in 2018: WHO 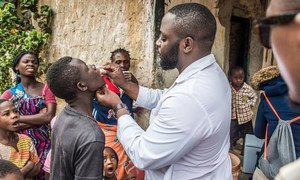 The UN health agency also announced on Thursday that the number of cholera cases decreased globally by 60 per cent in 2018, compared with 2017. This points to successful prevention and care of the sick in major cholera hotspots, which include Haiti, Somalia and the Democratic Republic of the Congo.

According to data from 34 countries, there were around 500,000 cases of cholera in 2018 and almost 3,000 confirmed deaths – although the true global number is likely to be much higher.

Outbreaks are still ongoing in several countries, including war-torn Yemen, where the UN agency says that reporting is “imprecise”. Nonetheless, it still believes that there has been a “significant downward trend” in the transmission of cholera, which affects mainly the people of developing countries who lack access to clean water. 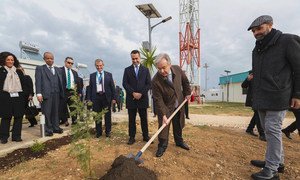 After touring the UN Global Service Centre in Brindisi, Italy, Secretary-General António Guterres lauded its work in supporting “some of the most difficult peacekeeping operations” over the last 25 years. The Centre provides critical logistics, technology and training to UN missions, agencies and other parts of the UN system worldwide.

The UN chief called the Centre “a key part of the UN’s Department of Operational Support and a vital tool in the service of peace”, and commended the determination of UN personnel to advance innovation, information and communications technologies, engineering and environmental support, and welcomed its efforts to help non-UN partners, such as the African Union and the Organization for Security and Cooperation in Europe.

The Centre “has the tools and the expertise to be effective,” according to Mr. Guterres, who added that “now is also the time to make responsible choices”, particularly “in reducing our carbon footprint in the field”, which means “committing to clean energy, recycling…and other steps that will benefit people and planet alike”. 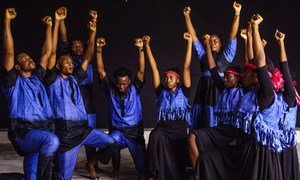 And finally, a story of hope from Nigeria, where a theatre production that was inspired by the humanitarian crisis in the country’s north-east, premieres on Thursday.

Bintu, the musical, takes its name from a young girl whose dreams of going to university are cut short by armed insurgents. After finding refuge in a camp, Bintu receives international assistance and slowly rebuilds her life.

Written and directed by Nigerian playwright Agozie Ugwu, with the help of the World Food Programme (WFP), the performance relies on song, dance and poetry to depict people’s struggles and their will to survive – along with the life-saving aid they receive.

The show opens in Lagos and transfers to Abuja early next year. “This work goes beyond a theatre piece,” Mr. Ugwu said. “It is a call to action from humanity to help humanity.”

To date, conflict between extremists and State forces in Borno, Adamawa and Yobe states has driven an estimated two million people from their homes. Nearly three million people struggle to meet their food needs in the three crisis-affected states – almost double the number at the same time last year.

Listen to or download our audio News in Brief for 19 December on SoundCloud: