A news policy paper launched on Thursday by the agency’s Global Education Monitoring (GEM) Report tackles the educational challenge of trauma, a condition experience by some school-age migrant and refugee children, whose overall number has grown by 26 per cent since 2000.

“Teachers are not, and should never be regarded as mental health specialists, but they can be a crucial source of support for children suffering from trauma if they’re given the right training,” said Manos Antoninis, Director of the GEM Report.

The number of people seeking international protection outside their country of origin has increased 70% since 2011. https://t.co/tgO2SPr5uZ #RefugeeDay pic.twitter.com/luZEnjHXoS

Many of these children have had traumatic experiences before leaving their homes, during the journey or while settling in a new community or country, which manifests in toxic stress with negative consequences that also affect their learning ability.

Eight years since the outbreak of conflict in Syria, the paper calls for better teacher training to provide psychosocial support to children who have lived through traumatic events.

Meanwhile, one-third of the160 unaccompanied asylum seeking children in Norway – from Afghanistan, Iran and Somalia – suffered from post-traumatic stress disorder (PTSD); and of the 166 unaccompanied refugee children and adolescents in Belgium, 37-47 per cent had severe symptoms of anxiety, depression and PTSD.

“Conflicts and displacement are not going away,” Mr. Antoninis said. “They call for considerable changes in teaching practice that countries must work into their plans”.

The report outlines that trauma is also high among the displaced in low- and middle-income countries, citing that 75 per cent of the 331 internally displaced children in camps in southern Darfur in Sudan met diagnostic criteria for post-traumatic stress disorder, and 38 per cent suffered from depression.

In the absence of health centres, schools often play a key role in restoring a sense of stability, but teachers must know and how to help affected students.

Unfortunately, they face challenges, particularly in emergency settings. While non-governmental organizations, including the International Rescue Committee, are training teachers, their reach is insufficient.

In Germany, most teachers and day-care workers said that they did not feel adequately prepared to address the needs of refugee children.

And in the Netherlands, 20 per cent of teachers with more than 18 years of mainstream school experience reported a high degree of difficulty dealing with trauma-affected students.

Some 98 per cent of teachers admitted to having encountered at least one traumatized student with in their work.

A review of early childhood care and education facilities for refugees in Europe and North America found that, although many programmes recognized the importance of providing trauma-informed care, training and resources were ‘almost universally lacking’.

“Shifting teachers’ approaches towards these children, helping them build confidence and self-expression through role playing and group discussions can hand them a life-line”, Mr. Antoninis underscored. 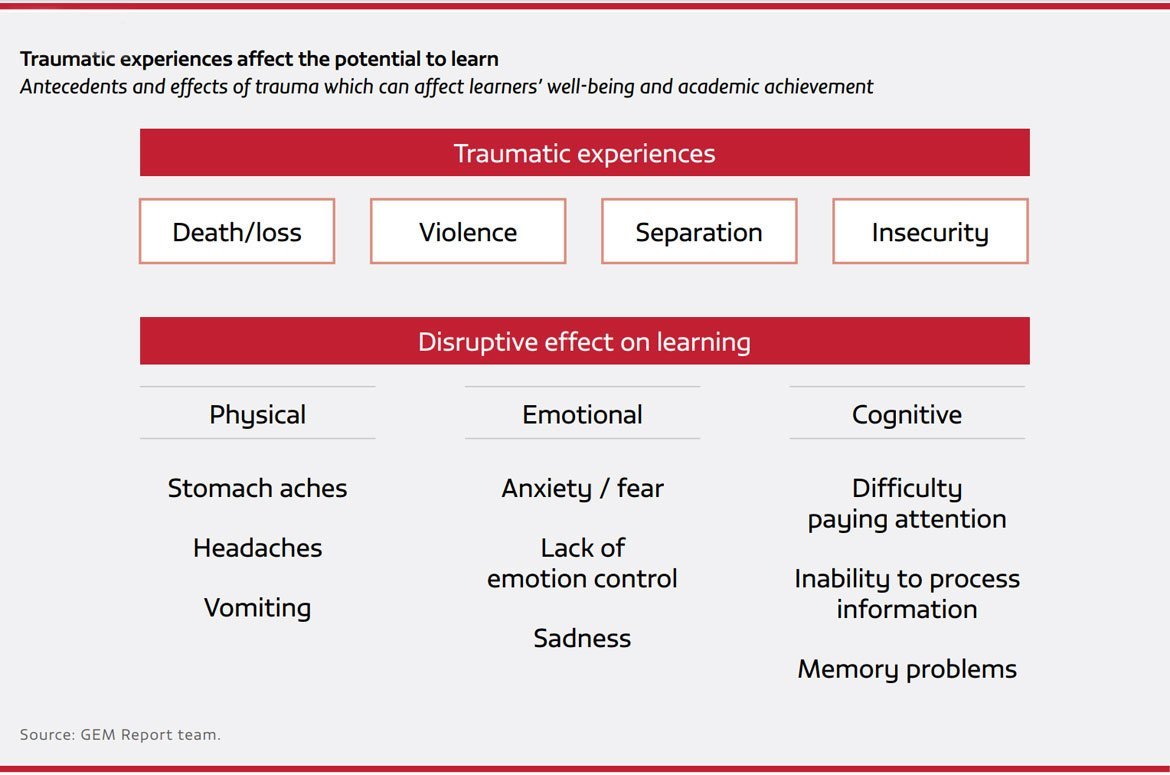