The UN chief was speaking at an event organized by the President of the General Assembly in New York on the Challenges of Teaching Tolerance and Respect in the Digital Age. 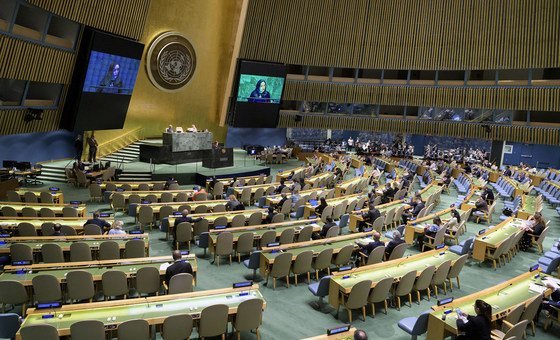 Combating Antisemitism and OtherForms of Racism and Hate, by UN Photo/Manuel Elias

He told those gathered he had recently viewed an exhibition at the Museum of Jewish Heritage called “Auschwitz. Not long ago. Not far away”.

“It is an apt title”, said the UN chief, noting that the Holocaust was “indeed not long ago – only as far back as a single average human lifespan”, and certainly “not far away – it happened at the heart of Europe, and it remains at the centre of our awareness as we fight anti-Semitism and other forms of intolerance today”.

Mr. Guterres recounted a study that revealed a 13 per cent rise in violent anti-Semitic incidents in 2018, compared to the year before, and observed that attacks on synagogues, graveyards and individuals in the United States, Europe and elsewhere, “continue to make many Jews feel insecure”.

Pointing to assaults on synagogues, massacres at mosques and bombings at churches he maintained that “this age-old hatred is showing grim staying power”.

And refugees and migrants continue to face hostility as “white supremacists and neo-Nazis are emboldened by elections showing the appeal of their racist messages”, continued the UN chief, flagging that in today’s digital realm, “we have new vectors of venom, algorithms that accelerate the spread of bigotry, and new platforms where far-flung extremists can find each other and spur each other on”.

While the UN “fights these ills as a matter of our very identity, founded as we were in response to genocide”, he acknowledged that “today we have reached an acute moment in this struggle”.

We need to treat hate speech as we treat every malicious act: By condemning it and refusing to amplify it – UN chief

“We need to treat hate speech as we treat every malicious act: By condemning it and refusing to amplify it” to incite discrimination, hostility and violence, he spelled out.

The UN High Representative for the Alliance of Civilizations is also finalizing an Action Plan on what more the Organization can do to support the safety and sanctity of religious sites.

“Our efforts need to step up most urgently in the digital space, where hatred is thriving”, he underscored, watchful that social media “provides a conduit for hatred on an enormous scale, with virtually no cost and no accountability, making them particularly appealing to those with evil intent”.

Moreover, it is being used to “polarize societies and demonize people, often targeting women, minorities and the most vulnerable”.

On remedying the situation, he signaled that a new report of the High-level Panel on Digital Cooperation urges social media to respond to concerns about the “growing threat to safety and human rights”, and that the Christchurch Call spurs governments and technology companies to tackle online extremism.

Mr. Guterres pushed for an investment in social cohesion so all of society “can feel that their identities are respected and that they have a stake in the future”, saying that UN offers a platform to discuss the way forward.

One rabbi from California drove home the brutal impact of the hate permeating societies globally, recounting how a gunman appeared in his synagogue in late April. Rabbi Yisroel Goldstein described how the attacker fired on his congregation inside the Chabad of Poway, near San Diego, killing one woman and injuring three others before fleeing the scene and being apprehended two miles away.

With his own hands still heavily bandaged from being shot during the attack, the rabbi spoke passionately from the General Assembly podium about how that day he stood in the lobby about to read a prayer to memorialize the last day of Passover when he suddenly heard “the thundering sound of gunshots”.

“I saw in the lobby of our synagogue, a house of worship, a home where children come to celebrate…this terrorist standing in the lobby, holding an AR-15 and I am looking down the barrel of it”, he recounted.

“I turned around to grab the children” he continued, “and the terrorist takes aim and shoots at me, blowing off my fingers”.

The Rabbi managed to pull the children to safety, including his four-year-old-granddaughter, who cried “why are you bleeding?”.

When he returned to find that the terrorist had been pushed out, the Rabbi stood on a chair, and pronounced: “God has spared us. Do not let this moment define us. It will not consume us”.

He emphasized at Wednesday’s event that each of us have to be seen as human beings, “not by our colour of our skin, not by our language, we are all children of God”.

In her opening statement General Assembly President María Espinosa said it had been a year of “despicable” attacks based on hatred, noting that “sadly, they come as no surprise”.

“What is frightening now is that it is no longer confined to extremist groups” but has become “part of a broader surge in intolerance, racism and xenophobia mainstreamed”, she lamented.

Ms. Espinosa recalled that the Assembly had met several times already this year to “discuss hate speech, nationalist populism and supremacist ideologies, and attacks against Muslims and Christians, as well as Jews; against people of all faiths and none”.

“We must redouble our efforts to ensure that…the seeds of hate do not find fertile ground”, she stated, encouraging education to address intolerance and combat falsehood and disinformation.

But, she underscored, “we must not see education as a vaccination that gives you immunity for life”, saying that it is part of an equation that also includes changing mindsets, standing up for values and “taking a stand against intolerance”.

“And we must also extend our vigilance to the internet and social media”, Ms. Espinosa continued, calling them “powerful tools” that can be used to “spread hatred and distort reality”.

Watch the UN’s Special Adviser on the Prevention of Genocide, talk about hate speech: