“I am shocked and appalled by reports of an incident yesterday in which a female patient and three paramedic staff were killed when the ambulance they were travelling in to Maarat Al Numan main hospital, in Idleb, was hit by a strike”, Panos Moumtzis said in a statement, which also offered his condolences. 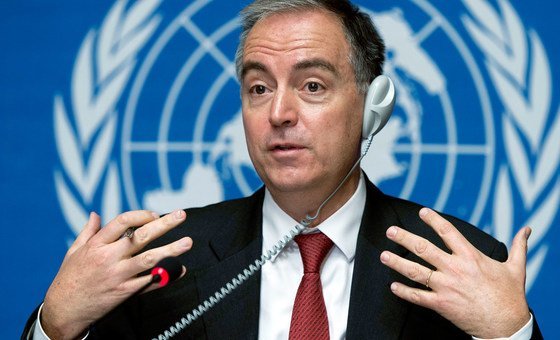 He said that “hundreds of civilians have been killed and thousands injured in the last few weeks” and that a 24-hour, seven-days-a week emergency humanitarian response has been activated in the de-escalation area, which hosts over three million people – more than half of whom are displaced.

Since 1 May, there has been an escalation in hostilities in southern Idlib and surrounding areas that has led to more the displacement of 320,000 people from the southern part of the de-escalation area, which includes Idlib.

“I am outraged by the ongoing violence affecting civilians in Idleb”, he asserted “There are daily reports of children, women, and men being killed, injured and displaced as a result of this violence”.

He remined the parties to conflict that they have “an obligation to protect civilians and to respect the principles of distinction and proportionality enshrined in International Humanitarian Law”.

Mr. Moumtzis paid “full tribute and respect to the humanitarian workers in Syria who risk their lives daily to assist millions of people made vulnerable by conflict” and lauded the aid workers who provide “humanitarian assistance” and professionals “providing basic life-saving services” throughout eight years of violent conflict.

He elaborated that at least 37 schools and 26 healthcare facilities have been damaged or destroyed as a result of airstrikes and shelling in the last two months alone, noting that two of the health facilities were in Government-controlled areas.

“International humanitarian law must be upheld by all parties and attacks on civilians and civilian infrastructure need to stop and they need to stop immediately”, stressed the UN Regional Humanitarian Coordinator.

UN Humanitarian Coordinator Mark Lowcock spelled out that “over the last six weeks, the conduct of hostilities has resulted in more than 230 civilian deaths, including 69 women and 81 children”.

Since March 2011, Syria has been in the throes of a conflict that has forced more than half the population to leave their homes. According to the UN humanitarian wing, OCHA, an estimated five million Syrians have fled the country while more than six million others are internally displaced. The crisis, described as the worst humanitarian disaster of our time, has left more than 13 million people in need of assistance, and caused untold suffering for Syrian men, women and children.