In a ground-breaking collaboration, the Governments of Norway, Iraq, Somalia, the United Arab Emirates (UAE) together with UN agencies and the International Committee of the Red Cross (ICRC) is taking on the global SGBV challenge.

The conference yielded a total of $363 million in pledges from 21 countries for 2019, 2020 and beyond, including $226.2 million to be spent on priorities this year alone.

The devastating violence is not inevitable and those gathered over the two-day conference, agreed that it can be prevented.

UNICEF chief Henrietta Fore advocated for “safer interventions across all sectors of humanitarian response” with a “more central role for local women’s organizations”, and new innovations to “end this epidemic”.

She flagged sexual abuse and exploitation; early marriage and pregnancy; physical violence; and intimidation and harassment, saying that “for millions of girls trapped within humanitarian emergencies, these are not distant nightmares – these are daily realities” that put women at “a double disadvantage in the uncertainty of an emergency”.

To address SGBV, we must do 3 things:

“From frontline service providers…to the highest levels of government. To UN agencies and NGOs”, she warned, “the stakes are huge – and the job is daunting”.

But she also spoke of their strength and determination “to move past the violence that’s been inflicted on them” by going to school, finding a job and supporting “other women and girls who have endured the same hardships”.

“Though they have experienced terrible injustices, what they’ve endured does not define them”, she asserted. “Their determination does”.

Throughout his many visits to war-torn countries, UN humanitarian chief Mark Lowcock has witnessed the unimaginable suffering of civilians and gross violations of international law.

“Sexual and gender-based violence is no longer a hidden horror”, he told the participants. “It is out in the open and there really is no excuse for inaction in the face of this abhorrent phenomenon in humanitarian crises”.

Pointing out that “survivors and people at-risk all over the world need material and tangible support close to where they live”, Mr. Lowcock expressed his hope that “grass-roots women’s organizations and others working on the front lines” would receive more funding for their vital work.

While the humanitarian response to SGBV has improved in recent years, much work remains, particularly refocusing prevention and response needs to include those affected.

“The international community must do more to support survivors and people at risk of sexual and gender-based violence, and to end the impunity that fuels this global pandemic,” said Natalia Kanem Executive Director of the United Nations Population Fund (UNFPA).

“With rising needs outpacing current resources, more and longer-term funding, including for women’s organizations, is needed to build a more effective response”, she stated. “We look forward to increased political will and financial pledges to deliver for women and girls and all survivors, to strengthen prevention, and to protect all those at risk”.

Tackle the problem ‘from all sides’

“It is a societal issue that demands urgent effort to address the root causes of sexual and gender-based violence, and this work must be led by States”, he spelled out, adding that “we have to tackle this problem from all sides”.

For its part, the UAE “firmly committed” to building on the Conference’s momentum, “translating the ideas discussed into action”, said UAE State Minister Zaki Nusseibeh. 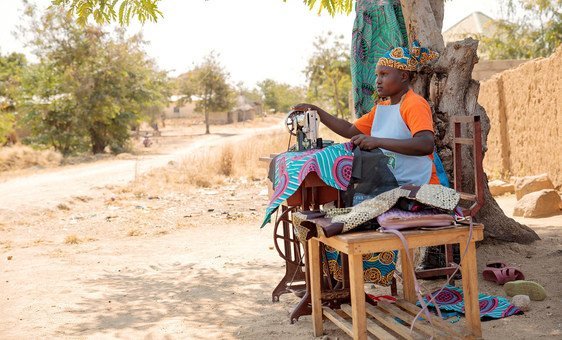 Marie-Noelle, 22, is a single mother of three and a SGBV survivor. She is a member of the Association of Unified Women of Mokolo, a beneficiary of the Women Economic Empowerment programme., by UN Women/Ryan Brown

The Conference comes at a critical moment for Somalia as its first dedicated legislation to combat SGBV has been proposed to the federal parliament.

“The passage of this crucial bill…shows our government’s commitment to provide justice for survivors of sexual violence,” said Women and Human Rights Development Minister, Deqa Yasin.

This $363 million raised will be used to fund UN, ICRC/International Federation of Red Cross and Red Crescent Societies, non-governmental organization and civil society mechanisms, including local actors and women’s groups engaged in SGBV prevention and response.

This is in addition to the unearmarked, or core funding, to humanitarian partners who work to prevent and respond to sexual and GBV, to the Central Emergency Response Fund and to Country-based Pooled Funds.

Hundreds of commitments were also made related to standards and legal frameworks, operational support, SGBV prevention and response services, leadership and coordination, and others which are specific to country contexts and areas of work.