Many offices and agencies of the UN have been mobilized to respond to the aftermath of the disaster, provide emergency aid, and coordinate the international community’s response.

The cost of reconstruction is estimated to be in the range of several billion dollars and, on August 10, Mark Lowcock, the UN’s Emergency Relief Coordinator, called for donors to “come together and put their shoulder to the wheel” for the benefit of the Lebanese people. 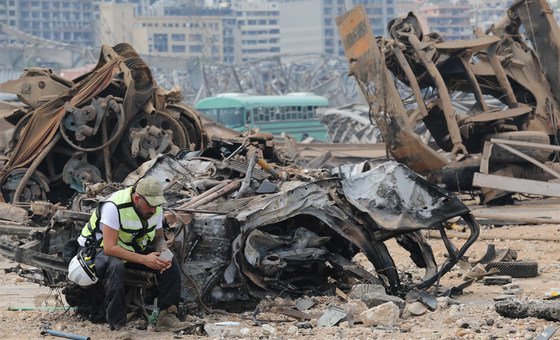 An emergency responder at the severely damaged blast site in Beirut, Lebanon., by OCHA

Three days later, a group of independent UN human rights experts released a statement decrying the “level of irresponsibility and impunity surrounding human and environmental devastation” in the city, and called for an independent investigation that clarifies responsibility for the man-made disaster, and leads to justice and accountability.

In their statement, the experts also maintained the right of the Lebanese people to clear and accurate information about the health and environmental risks to which they are exposed.

The explosions have led to much soul-searching in Lebanon, but it is far from the only country whose citizens are at risk from sites containing dangerous materials: according to the Small Arms Survey, a research organization based in Geneva, Switzerland, tens of thousands of people have been killed by unplanned explosions at arms depots over the past four decades.

But, as Alfredo Parroquín-Ohlson, the head of Cargoes and Technical Cooperation Coordination at the IMO, explained to UN News, whilst the UN can convene countries to thrash out these rules and guidelines, the states themselves are responsible for making sure they are followed.

“Monitoring falls to shipping companies, and it is the responsibility of each country to verify that regulations are applied and implemented properly. If procedures are not followed, then there will, of course, be gaps. This clearly happened in the case of Beirut”, he said.

“We can only hope that this kind of catastrophe raises the general awareness of the risks involved”, added the UN official, “and we are sure that many ports are taking a closer look at the kind of dangerous materials they have on their hands, and are now revising their procedures.”

IMO
A container ship unloads its cargo at a port.

The responsibility of governments around the world to identify risks, is included in the Sendai Framework for Disaster Risk Reduction, the first of the 2030 Agenda global agreements, adopted in 2015, which sets out how Member States can reduce risk. It calls for Member States to finalize their strategies for disaster risk reduction by the end of this year.

Mami Mizutori is the head of the UN Office for Disaster Risk Reduction (UNDRR), the UN’s lead agency for risk and resilience,  charged with overseeing implementation of the Sendai Framework.

She told UN News that, whilst the current UN response in Beirut is necessarily focusing on the immediate needs of the affected citizens, it is also important to discuss how to reduce the likelihood of a similar incident hitting the city in the future.

Will it happen again?

“The essence of the Sendai Framework is about shifting attention from responding to disasters, to changing behaviour, so that we can mitigate risks from disasters before they hit and, in doing so, reducing deaths and economic loss, and make it more likely that we will achieve sustainable development”, she said. “In short, it’s about prevention and building resilience for the future.”

Beirut is a stark reminder that disasters don’t wait in turn to strike us. Mami Mizutori, Special Representative of the Secretary-General for Disaster Risk Reduction

“Ports are critical infrastructure, and essential services, and they need to be built in a way that takes all kinds of risk into consideration, including the kinds of goods that are being brought into the port”, added Ms. Mizutori.

“We have robust international rules and regulations regarding the operation of ports, and the ways that substances are stored, but often we see that regulations are not implemented. Governments need to invest in the right people and the right infrastructure. If this doesn’t happen, we will see more technological hazards turning into disasters, whether it’s at a port, a mine, big industrial facilities, or at nuclear power plants.

“When we don’t have enough risk governance, the likelihood of a catastrophic event grows”, she said. “Beirut is a stark reminder that disasters don’t wait in turn to strike us.”

The message from these UN officials is that fresh rules and regulations are not necessarily needed. What is more important, is a change in our behaviour and the way we factor risk into the way we live, whether at a personal level, or at a national level.

Mr. Parroquín-Ohlson notes that personnel working at ports should not necessarily shoulder the blame, when disaster strikes.

“Staff need to be supported by their institutions, who have robust rules and regulations available to them. In some examples we have seen, staff were not well trained, but, in others, we saw that there was a lack of internal procedures within the administration as a whole”, he said. “For example, there needs to be a clear policy, stating who is responsible for the storage of such cargo, up to the point that it leaves on a ship.”

For Ms. Mizutori, part of the answer is for countries to put disaster risk reduction at the heart of government: “The countries need to put money behind this, and establish national disaster management agencies, which are connected to all the other ministries, working directly under the Head of State, or the Cabinet Office, to ensure that they can take charge of putting prevention at heart of policy-making.

The difficulty, of course, is convincing people that it is worth putting money into something that might happen only happen every 30, or even 100 years. Our job is to help explain why investing in prevention pays.”