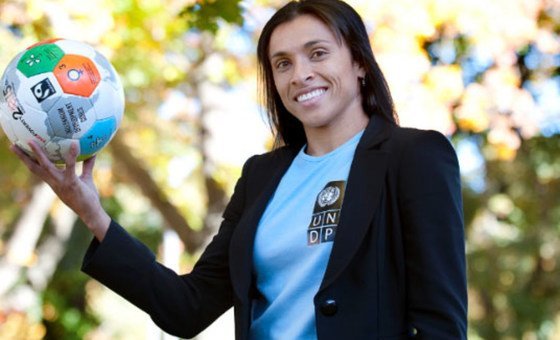 Brazilian footballer “Marta” not only plays for the Orlando Pride in the National Women’s Soccer League and the Brazil national team as a forward, but with 17 goals – the same number as the SDGs! – she is the top scorer ever at FIFA World Cup tournaments – that’s both for the men and women’s championships.

This UN Women Goodwill Ambassador said she is “fully committed” to lend her voice and life experience “to ensure that women and girls around the world have the same opportunities that men and boys have to fulfill their potential”.

“Gender equality and the empowerment of women and girls are the direct objectives of Goal 5, but they also play a key role in the achievement of many other goals, as well as supporting the overall success of the SDGs”, said the 33-year-old champion.

“There really can be no development that is sustainable without gender equality”, she stressed.

Ms. da Silva became an SDG Advocate because she wanted “to help inspire many more girls and women, boys and men, to think of gender equality as a catalyst to create opportunities so that the next generation doesn’t have to go through what I did”.

She recounted that born in a small town, in a poor family, “prejudice and lack of opportunities hurt me many times along the way”.

“It hurt when the boys did not let me play, it hurt when adult coaches from opposing teams took me out of championships, because I was a girl”, she recalled. “It hurt to leave my family to play professional football at age 14; but to see how my mother never gave up was my greatest inspiration”.

The footballer is using that same strength and commitment “to support the Secretary-General to promote the Goals, raise awareness, maintain global commitment and call for greater ambition and scalable action to achieve the SDGs by 2030, leaving no one behind.

Hindou Oumarou Ibrahim: Climate change is ‘the mother of all battles’ 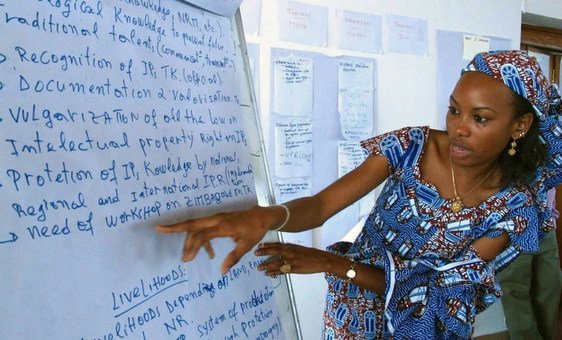 Environment and Indigenous Rights activist Hindou Oumarou Ibrahim, expressed to UN News her passion for all 17 SDGs “as a package”.

She elaborated that indigenous peoples don’t see “any difference between economic and social issues and environmental protection”.

“Nature gives us food, medicine, clean air and pure water”, she explained. “Nature is the basis of our economy and keeps us in balance to cohabitate peacefully among communities”.

Calling it “the mother of all battles”, Ms. Ibrahim said that “the international community should focus all of its efforts on fighting climate change”.

“The reality is, if we don’t address the climate crisis our biodiversity will disappear, our oceans will die, and the poorest and marginalized communities around the world will suffer”, underscored the SDG Advocate. “Fighting climate change is more than an objective, it is a battle that will require every human on this living planet to join”.

The Chadian activist sees her SDG advocate role an as “a bridge between the UN System and those who are left behind”, saying that she wants to be “the voice” of those who are silenced, the most vulnerable and of Indigenous Peoples solutions.

“They have so much to bring to the table, if only global leaders could take the time to listen to them”, she upheld. In the coming months, Ms. Ibrahim will be advocating for her “indigenous sisters and brothers” throughout international conventions, including the UN Climate Change Conference and Convention on Biological Diversity.

“I will do my best to bring concrete solutions, on the ground, where they are needed the most”, she asserted.

Edward Ndopu: Disability and possibility ‘belong in the same sentence’ 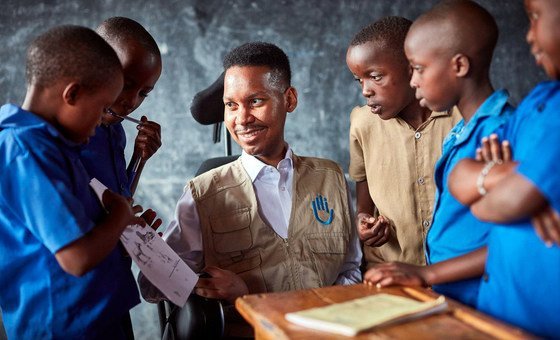 Twenty-nine-year-old Eddie Ndopu is used to beating the odds. Aged two, the African human rights and disability advocate was diagnosed with spinal muscular atrophy, with a life expectancy of five years.

The new SDG Advocate aims to inspire greater ambition by reaching one of his “most ambitious goals to date”, which is to deliver a televised address to the UN from outer space.

“In so doing”, he asserted that he would be “the first physically disabled person to travel into space”.

According to Mr. Ndopu, his disability “is just one aspect” of his life and he wants “to show the world that the words ‘disability’ and ‘possibility’ belong in the same sentence”.

“I want to address the UN from space to show young people who represent a cross-section of society that with a larger than life personality and a bit of human ingenuity, there’s nothing one cannot achieve, including the Global Goals for Sustainable Development”, he hammered home.

He heard about the SDGs in 2015 while participating in the World Economic Forum on Africa in Cape Town, before the UN General Assembly adopted the 2030 Agenda for Sustainable Development.

“The global goals represent a comprehensive, holistic package of ideals and ideas for creating the world we as humanity aspire for”, he told UN News. “I am deeply passionate about ensuring that the needs and aspirations of the most vulnerable and neglected segments of society are reflected in all of the SDGs, so that the agenda – in its entirety – speaks to everyone, equally”.

A disabled person is seldom seen “in the driver’s seat of international development, changing the world in real time”, he said.

“I want to demonstrate to children with disabilities, using my life as a point of reference, that they can grow up to become the protagonists in the story of their own lives”, that “they themselves are the ones they have been waiting for”, he concluded.

Dia Mirza: The environment is ‘essential’ 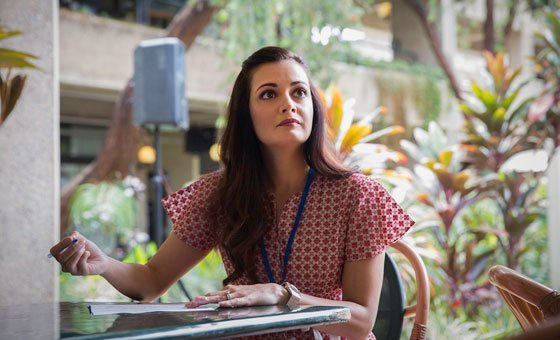 Bollywood actress, Miss Asia Pacific 2000, and UN Environment Programme Goodwill Ambassador, Dia Mirza added the title of SDG Advocate, because “the SDG Goals themselves are the real inspiration to everything; for people, peace and the planet”.

“This is the platform that I am grateful for, because it allows the voice of protection to reach citizens of the world, influencers, and policymakers, that can help all of us to be the change”, she said.

Of all the goals, Ms. Mirza sees it as “essential” that people and Governments accept the fact that “if we do not secure the health of the environment we can never hope to progress”.

“The health, survival, justice, and peace of our people are directly impacted by climate action”, she spelled out.

Hailing from India, she noted that her country “will soon become the most populous nation”.

“I hope to ensure that my work in advocacy policy implementation and human behavioral changes will lead to securing the health of the environment”, she explained, pointing out the need for clean air, water and soil along with “an effective waste management system that is practiced nationwide”.

Ms. Mirza also hopes “to be able to ensure that extended producer-responsibility is implemented”, that forests and wildlife are protected and that rivers are rejuvenated and clean.

“Children are at the center of my focus as they are most affected by climate injustice and environmental degradation”, the SDG Advocate concluded. 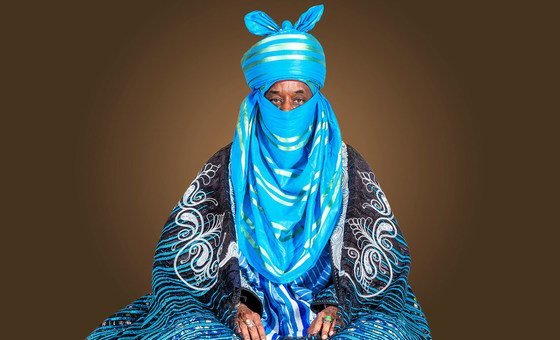 Muhammadu Sanusi II, Emir of Kano, became involved with the SDGs, prior to the 2030 Agenda’s official launch, when he was the Governor of the Central Bank of Nigeria, from 2009 to 2014.

At that time, he closely followed the Millennium Development Goal projects in Nigeria led by Deputy Secretary-General Amina Mohammed, who was then the President’s Special Adviser on MDGs.

Having witnessed the transition from MDGs to SDGs, he explained to UN News that he is using his present role to “push the goals through”, saying that focusing on them “is critical to lifting my people out of poverty”.

His Royal Highness is equally passionate about two SDGs: Quality Education (SDG4) and Decent Jobs and employment (SDG8) – with an emphasis on the role of women.

“If you educate the girl child, you deal with so many issues like domestic violence, gender inequality, maternal and child mortality, high fertility rates etc. and also make progress towards breaking the inter-generational cycle of illiteracy and poverty”, he said. “So, if you are looking for a single silver bullet that will address many of these issues on the African continent, in my mind it will be to focus on providing the girl child an education and the opportunity to earn income and contribute meaningfully to the society”.

Even with education, “you still need to provide economic opportunities”, the Emir continued, adding “which is why at the macro level, we need to get policies right” by investing in “power, skills and infrastructure.”

“If you educate girls and women, and provide them those opportunities, you begin to really address many of the other SDGs”, he concluded. 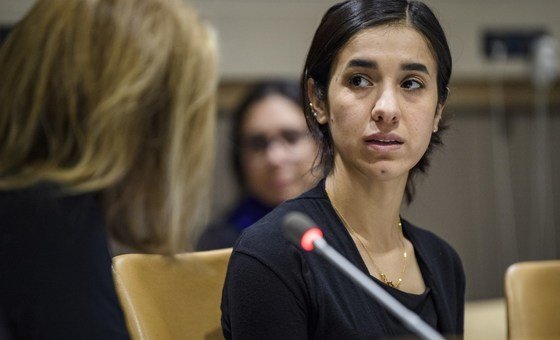 The sixth new SDG Advocate, Nobel Peace Prize Laureate and Goodwill Ambassador for the Dignity of Survivors of Human Trafficking, Nadia Murad, has been a loud voice for human rights, while also drawing attention to the plight of hundreds of thousands of displaced children.

A human trafficking survivor herself, the 26-year-old Yazadi woman from Iraq was sold into sexual slavery by the ISIL terrorist group.

While unable to speak with UN News, specifically for this story, she told the Security Council that the international community must “shoulder the responsibility” to rescue those still missing and in captivity, since 2014, when the terror group asserted control over large swathes of Iraq and Syria.

Listen to her in the audio feature from UN News’s Daniel Johnson, associated with this story, talking about the importance of bring perpetrators of sexual slavery to justice.