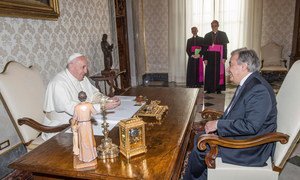 The UN Secretary-General thanked Pope Francis for his strong support for the global Organization following an audience with the Pontiff on Friday.

António Guterres praised the head of the Roman Catholic Church for speaking out on issues such as the refugee crisis, poverty, inequality and the climate emergency, which are in line with UN core values reaffirming the dignity of every person.

The Pope in turn gave thanks for those who strive to create a more humane and just society.

He called for trust in dialogue between people and between nations, and support for international organizations. 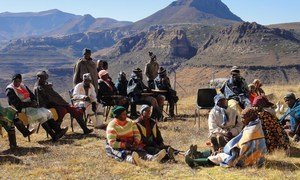 Humanitarians have launched a $34 million appeal for Lesotho, where devastating drought has left half a million people facing severe food shortage, with tens of thousands “one step away from famine.”

The funding will support more than 260,000 residents of the southern African nation through April 2020.

“Most of the food insecure people are in rural areas and we estimate that at the peak of the lean season, which runs from January to March, some 71,000 people will face emergency conditions in rural districts,” said Jens Laerke of the UN humanitarian affairs office, OCHA. 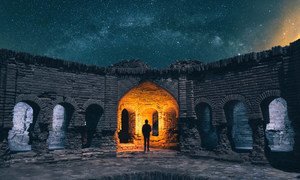 Authorities in Iran are being urged to release scores of people arbitrarily arrested during recent demonstrations and who reportedly have been abused while in custody.

Sixteen UN independent human rights experts made the appeal in a statement issued on Friday, expressing that they were “deeply disturbed” that alleged excessive use of force by the security forces resulted in casualties and deaths.

“Reports suggest that detainees are being tortured or are suffering other forms of ill-treatment, sometimes to extract forced confessions”, the experts said.

The full story can be found here. 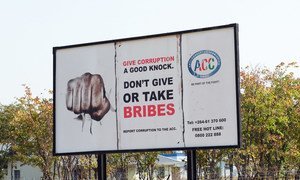 The main UN conference which draws up international agreements to fight the scourge of corruption, ended on Friday with resolutions that will strengthen prevention and the effectiveness of anti-corruption bodies worldwide, including important data collection provisions.

The Conference of the States Parties to the United Nations Convention against Corruption, also advanced preparations for the first-ever UN General Assembly special session against corruption, taking place in April 2021.

“This session of the world’s most representative conference on this universal and comprehensive legal instrument against corruption, has reaffirmed and renewed the commitment of the international community to prevent and fight this crime”, said the head of the UN Office on Drugs and Crime (UNODC), Yury Fedotov, in his closing remarks.

“Your achievements can help to ensure that work through the Convention against Corruption makes a decisive contribution as we enter this decade to deliver on the Sustainable Development Goals (SDGs).”

The Convention against Corruption, with 186 parties, is the only legally binding universal anti-corruption instrument. Every two years, the States parties to the Convention meet, with the ninth session scheduled to take place in 2021 in Egypt.

Listen to or download our audio News in Brief for 20 December on SoundCloud: