Key economic forum in Russia: New technology a ‘vector of hope’ but also ‘a source of fear’ says Guterres 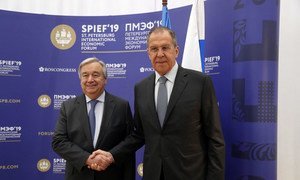 Technological innovation is continuing to transform the world, with the potential to propel us all towards reaching the 2030 Sustainable Development Goals (SDGs) said the UN Secretary-General António Guterres on Friday, at the Saint Petersburg International Economic Foruhow m in Russia.

But as much as it is a “vector of hope, it is also a source of fear”, that will cause massive disruption to labour markets as they adapt with an “enormous amount of jobs both created and destroyed by artificial intelligence”, added the UN chief.

St. Vincent and the Grenadines breaks a record, as smallest ever Security Council seat holder 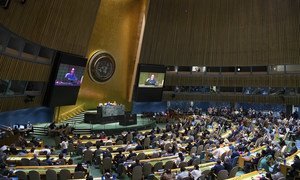 Following a secret ballot held on Friday, the UN General Assembly elected five countries to the Security Council, including St. Vincent and the Grenadines, the smallest so far. Also elected were Niger, Tunisia, Viet Nam and Estonia.

The five States will take up their seats as non-permanent members of the Security Council in January 2020, replacing Cote d’Ivoire, Equatorial Guinea, Kuwait, Peru and Poland.

Our full coverage of the elections can be found here.

Migrants and refugees suffering from tuberculosis are being left “effectively to die” in a Libyan detention centre south of Tripoli, the UN human rights office, OHCHR, said on Friday, citing reports that those returned to shore by the coastguard have been disappeared or sold to traffickers.

Amid ongoing conflict in and around the capital, OHCHR spokesperson Rupert Colville expressed deep concern about the “ghastly conditions” in which migrants and refugees are being detained in the capital Tripoli and elsewhere.

The UN Human Rights office has urged Australia uphold Press freedom, after a decision there to investigate the country’s national broadcaster for reports it ran on alleged unlawful killings involving troops in Afghanistan.

Spokesperson Rupert Colville told journalists in Geneva that “freedom of the media as you all know very well, is essential to the protection of all human rights. Violations often come to light solely because of the work of investigative journalists who play a crucial role in fostering transparency and holding Governments and other national authorities accountable for their actions.”

He added that “Australia like any other State must abide by its international human rights obligations including by ensuring that its national legislation is in line with international law.”

Citing the UN Human Rights Committee, Mr. Colville noted its comment that the police probe was “incompatible with international human rights law to invoke national security laws to suppress or withhold from the public information of legitimate public interest that does not harm national security”.

Hospitals, schools under ‘near daily attack’ in Syria’s north-west

“Airstrikes, artillery shelling and barrel bombs” are responsible for “near-daily” attacks on civilians, hospitals and schools in north-west Syria, the UN Office for the Coordination of Humanitarian Affairs (OCHA) said on Friday.

Amid deadly violence in opposition-held Idlib province, where a Government-led military operation escalated in late April, OCHA said that the hostilities had left “at least 160 civilians confirmed dead”, and hundreds more injured.

Since 28 April, there have been 25 confirmed attacks on healthcare in the north-west, including on 24 health facilities and one ambulance, spokesperson Jens Laerke told journalists in Geneva: “We are seeing a military escalation, absolutely, no doubt about that. Now, after eight years of war in Syria, I think every time that we kind of reach the limit of the language that we have, we speak about disasters, catastrophes, ‘this is the end’, ‘meltdown of humanity’ – I recall many of these words having been used here – we see something even worse.”

Some three million people in Idlib need protection, according to OCHA, which has warned that “education is also under attack”, with 36 reports on attacks on schools in the north-west by the end of last month.

Eleven UN-appointed rights experts have called for an independent probe into what they say is a “staggering number” of unlawful deaths and police killings in the Philippines, linked to the authorities’ self-declared war on drugs there.

In their appeal to the UN Human Rights Council to carry out the investigation, the experts express concern over alleged killings of rights activists, noting that “very few independent and effective” inquiries have taken place.

Independent media and journalists have also been threatened, they claim, while the law has been “weaponised” to undermine press freedom and judges’ freedom.

The Human Rights Council is made of 47 UN Member States elected by the UN General Assembly. Its next session begins on 24 June in Geneva.

Listen to or download our audio News In Brief for 7 June on SoundCloud: