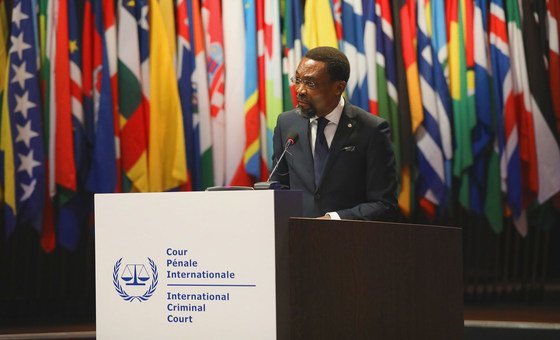 The ICC President, Chile Eboe-Osuji, addresses the Assembly of States Parties in The Hague, Netherlands in December 2019., by ICC

The ICC investigates and tries people for genocide, war crimes, crimes against humanity and the crime of aggression and has a key role to play in helping countries to bring peace and justice as well as build strong institutions. Those aims are central to the Sustainable Development Goal 16, one of 17 targets agreed by countries across the world to eradicate poverty, build a fairer and more peaceful world whilst protecting the planet.

“The ICC has a very direct value to socio-economic development, because it aims to deter armed conflicts and the atrocities that they breed. Without justice, conflicts, atrocities and fear would reign free.

In concrete terms: how can we have successful socio-economic development, if farmers cannot go to their farms because of military operations, or landmines? Where entrepreneurs cannot do business due to destruction of economic infrastructures? Where children cannot go to school? Where precious resources are wasted on weapons, rather than education and healthcare? Where investors are scared away by conflict and instability? Where people are killed, injured and traumatised for life?  Where the best brains of the nation are compelled to flee in search of a safer life elsewhere? And where countries struggle to cope with refugee flows from neighbouring countries at war?

The devastating effect of wars on economic development cannot be overstated. According to a study published in 2011 by the World Bank, the average cost of civil war is equivalent to more than 30 years of GDP growth for a medium-size developing economy and trade levels after major episodes of violence take 20 years to recover.”

How does the ICC’s work support SDG 16?

“The ICC does this by addressing crimes that threaten the peace, security and well-being of the world: genocide, war crimes, crimes against humanity, and the crime of aggression. We strive toward a world that will no longer tolerate such atrocious crimes being committed with impunity.

By helping to deter atrocious crimes, the ICC contributes to the reduction of violence and related deaths, which is the first objective of SDG 16.

By seeking accountability where national justice systems are unable to do so, the ICC reinforces the principle of the rule of law and provides victims with access to justice, which are key targets under SDG 16. The ICC system encourages capacity building of national judicial institutions – another SDG 16 target”.

What impact is the Court having on people’s lives?

“The impact is most tangible in the affected communities. The ICC has granted victims with unprecedented opportunities for access to justice – one of the key elements of SDG 16. Victims receive free legal assistance and have the right to request reparation for the harm they have suffered. This focus on reparative justice is a hallmark of the ICC’s proceedings.

The ICC’s Trust Fund for Victims is currently realizing the Court’s first judicial orders on reparations. In addition, the Fund has provided physical and psychological rehabilitation as well as socio-economic support to almost half a million victims through its assistance programmes.

Read more here about some of the people that have been affected by crimes.

The ICC has loosened the grip of tyranny in our time. Oppressors can no longer be sure that they would enjoy complete and utter freedom from accountability for their cruelty Chile Eboe-Osuji, President, International Criminal Court (ICC)

Globally speaking, the ICC has loosened the grip of tyranny in our time. Oppressors can no longer be sure that they would enjoy complete and utter freedom from accountability for their cruelty. Victims now have a place that they can look to in hope of justice. And the oppressors will always have to worry about what the ICC might do, sooner or later.

Another significant effect is the impact on national legal systems. Scores of States Parties to the Rome Statute, [the treaty which established the ICC], have updated their national laws to allow their own courts to prosecute genocide, crimes against humanity and war crimes”.

What are the greatest challenges the Court faces?

“One of the greatest challenges is that not all states are parties to it. While about two-thirds of the world’s sovereign states are ICC States Parties, some 70 UN Member States are yet to join the Rome Statute and pledge their cooperation with the Court. But, even more worrying is the fact that some states are actively undermining the ICC’s work, most recently the United States, which has used draconian measures against the ICC and its personnel, including economic coercion, with a view to influencing the Court’s actions.

This is entirely unacceptable and needs to end. I am grateful for the staunch support in the face of these attacks that we see from our States Parties, regional organisations, professional associations, civil society and citizens, including US citizens”.

© ICC
The International Criminal Court marks the opening of its judicial year in January 2020 at the seat of the Court in The Hague, Netherlands.

What can ordinary people do to support the ICC and SDG 16?

“Everyone can support the Court, by bringing democratic pressure to bear on their governments to support it. If your country has not yet joined the Rome Statute, you can mobilise to urge your government to join, and thereby strengthen international justice. People can also help to raise awareness about the Court for instance on social media. You can also donate to the ICC’s Trust Fund for Victims.

Join the world’s largest conversation on “The future we want”.
#ICC President Eboe-Osuji on the vision of over one million survey respondents so far, who are calling for a more peaceful, #MoreJustWorld
#UN75 @JoinUN75 ➡https://t.co/IwSEjfxqkq pic.twitter.com/vn4dYrp3bP

What does the ICC do?