“I count on your commitment to this appeal”, Amina Mohammed told the meeting via videoconference, on factors driving civil strife worldwide. “And I count on your renewed political and financial investments in prevention and solutions, to stave off security and conflict risks, at a time when the world needs peace and calm more than ever before”.

She informed that the pandemic continues to exacerbate the risks and drivers of conflict, “from cross-border insecurity and climate-related threats, to social unrest and democratic deficits”.

“Grievances and inequalities are deepening, eroding trust in authorities and institutions of all kinds, and increasing vulnerabilities”, she said.

Millions of women at risk

The deputy UN chief cited the diverse impacts of the pandemic on economic and social inequalities, as well as on the promotion and protection of human rights, especially for women.

“Parties to conflict are taking advantage of the pandemic to create or aggravate insecurity and impede medical care and other life-saving assistance and services”, she attested.

At the same time women are disproportionately employed in the sectors most affected by lockdowns – where there is “an alarming spike” in gender-based and domestic violence – and are more likely than men to lack savings, social security and health coverage.

“How can we talk about peace and security when millions of women are at greatest risk in their own homes? And we know there is a straight line between violence against women and girls, civic oppression and conflict”, stated Ms. Mohammed.

Turning to linkages between climate change and security challenges, she dubbed the climate emergency “a major driver of inequality, insecurity and conflict”.

She recounted her own fact-finding missions in the Sahel, Lake Chad region and Middle East, noting connections between the large-scale displacement of people and “extreme weather events like droughts and floods that destroy homes, livelihoods and communities”.

“In some cases, the climate crisis threatens the very existence of nations”, Ms. Mohammed spelled out.

The UN official also pointed to “stalled” progress on development that is continually being addressed in a “fragmented” manner.

While noting, “the drivers of conflict are not static: they change and evolve”, so too are the opportunities, including new means for learning and growing, she continued.

“The pandemic has already shown that rapid change is possible, as millions of people adopt new ways of working, learning and socializing”, the deputy chief said, urging everyone to “build forward better”.

She also maintained that recovering from COVID has “reinforced the need for the 2030 Agenda for Sustainable Development – our ultimate prevention tool”, including on gender equality, and upholding the rule of law and good governance.

She called for a “whole-of-UN approach” to the contemporary challenges and drivers of conflict, which must include all Member States.

🎬 Join us LIVE for the presser by @ComradeRalph of Saint Vincent and the Grenadines, President of the Security Council for November, on the Council’s programme of work for this month.
🗓️ 2 November 🕐 1pm EDT https://t.co/O3Dv08MU66

Munir Akram, President of the Economic and Social Council (ECOSOC), attributed the UN’s failure in living up to “the ideals of collective and cooperative security” to an “unequal world order”.

The root causes of conflicts “range from the internal struggles for scarce resources; external contests for precious natural resources, and interventions designed to suppress the struggle of peoples to reclaim their own political and economic destinies”, he said.

And due to the COVID-19 pandemic, the world economy is projected to contract by 5-10 per cent, depending on when the virus can be brought under control, according to the ECOSOC chief.

Noting that over a 100 million people will likely be pushed back into poverty, he flagged that “as usual”, the poorest countries and people “will suffer the most”.

Unless they receive financial assistance, Mr. Akram said “many developing economies – with lost revenues and laden with unplayable debt – are likely to face economic collapse”, which “would spread chaos and further inflame regional conflicts and global tensions”.

Ibrahim Mayaki, head of the New Partnership for Africa’s Development (NEPAD), painted a picture of African populations migrating to cities, including in largely rural countries, warning that conflict only adds to the difficulties States face in providing services for rural dwellers.

He noted that some African border areas, are virtual magnets for violence perpetrated by armed groups and warned that global warming in the Sahel is bringing about “extreme climate events”.

Chairing the meeting – his Caribbean island nation holding the Council presidency for November – Prime Minister of Saint Vincent and the Grenadines, Ralph Gonsalves, reminded that most of the region’s problems do not have military solutions and rejected any solutions that bypass the needs and aspirations of local populations.

He underscored the Government’s urgent responsibility to “end suffering” especially in conflict settings, adding that current chasms cannot be overcome with “baby steps.” 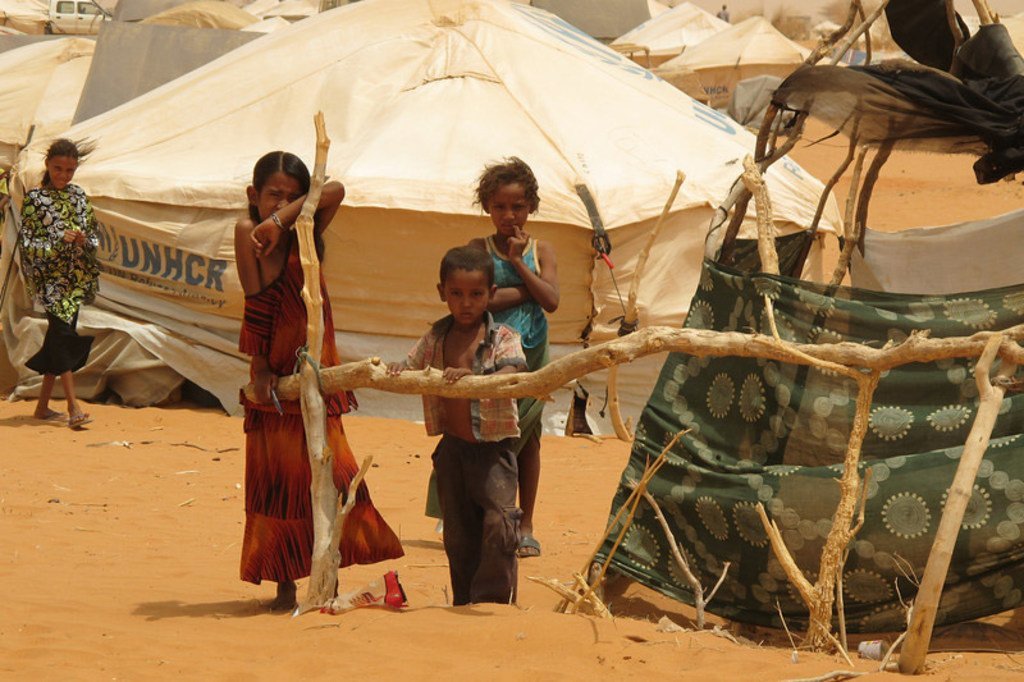 WFP/Justin Smith
Drought has affected residents of the Mbera refugee camp, Mauritania, in the Sahel region of Africa.