“We need to rescue the planet” he spelled out. 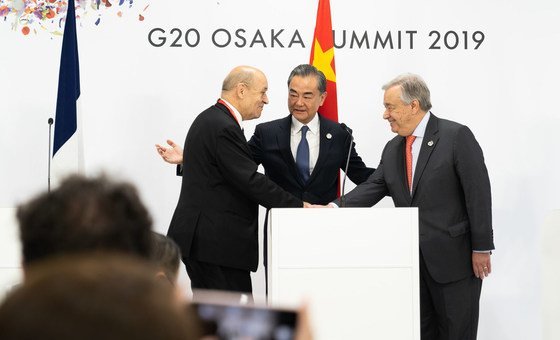 Mr. Guterres expressed his gratitude to both countries not only for their “climate action” but for their multilateral approach to climate change, which he said was “absolutely essential” to the success of the 2018 UN climate conference (COP24) in Katowice, Poland, last December.

However, he noted that the recently concluded UN Framework Convention on Climate Change (UNFCCC) meeting in Bonn was not a success, saying that the realities on the ground today are “even more difficult” because of “political failing in some areas of the world”.

“We need a boost in political will” asserted the UN chief. “I very much count on the determination of both China and France, both with the Paris Agreement, both with climate action and with multilateralism, to allow for our capacity to overcome the present difficulties”.

The Secretary-General spoke about the upcoming Climate Action Summit, which he is hosting in New York this September, “to raise ambition, to make sure that we are able to commit clearly to implement the decision that was taken in Paris for $100 billion per year” to boost the developing world’s capacity for mitigation and adaptation.

At the same time, he hopes that the resources can be used to reform and replenish the Green Climate Fund, a mechanism he described as “essential for the finance of climate action”.

We need a boost in political will — UN chief

Mr. Guterres informed the meeting that the UN Secretariat is “working very closely with the UNFCCC and IPCC [Intergovernmental Panel on Climate Change], whose recent recent report he called  “a red alert”,  but also saw as  “a strong stimulus for action”.

“We do believe that it’s necessary to limit the growth of temperature at the end of the century to 1.5 degrees”, which “requires carbon neutrality midcentury…[and] an enhanced effort with the nationally determined contributions that will be reviewed in 2020” said the UN chief.

Acknowledging “the difficulties and the problems each country has”, he expressed his gratitude to both France and China for their determination, “to increase, ambition and to make sure that the political will of the international community, in a multilateral way, will match the enormous challenge that we are facing”.

“I very much count on the determination of your two countries to make sure that the Summit is a success, that the review of the nationally determined contributions will be a success, and that others that are more reluctant, that are more problematic, in the end will feel that they are involved”, concluded the Secretary-General.